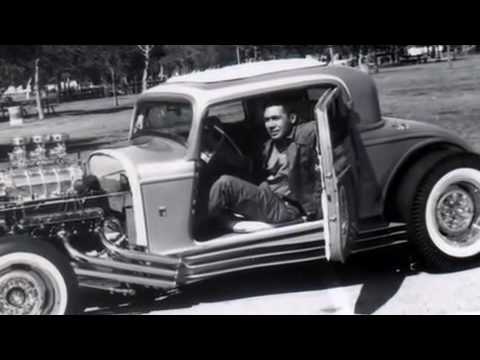 Wow, what a story behind the Lil’ Duece Coupe!  It seems so many really great automobiles are rescued from behind garages and pulled out of swamps by amazing people with mechanic’s souls who spend their free time restoring and protecting automotive nostalgia.

The cover art on the Beach Boy’s Lil’ Duece Coupe album features a photo from a shoot for Hot Rod magazine of Clarence “Chili” Catallo’s 1932 Ford Coupe. The full shot showing Chilli and his car was featured on the front cover of the June 1961 edition of the magazine long before the album was produced. Chilli was working at the family store and befriended the mechanics at the garage across the street. He found this gem(though it was not much of a gem until he fixed it) behind the Michigan garage and bought it for just $75 when he was 15 years old.

Watch this video of Curt Catallo (Chilli’s son) – the story is great. Chilli had sold the car early in life and repurchased it in the 1990s for over 40,000 dollars. I for one am glad it’s back in their family – seems like that is where it belongs. Happy Driving Curt!